Lachlan Jobbins is the president of Camdenville Paddock Community Garden and the founder of Food Scrap Friday, a way for families from Camdenville Public School to recycle their food waste into soil-enriching compost. Check out our photo report to see the pictures.

Community gardens can be a great place to grow, meet people and learn. Some community gardens can suffer from lack of common vision and leadership experience. They risk becoming a playground for a couple of enthusiasts who want to grow veggies or just experiment and gradually they lose their openness and community feel.

Camdenville Paddock Community Garden is the complete opposite. This garden has been successfully collaborating with a school and through their program “Food Scrap Friday” they’ve just saved their first tonne of kitchen scraps from landfill. We met the president of the garden Lachlan Jobbins to ask about what’s behind this success and how beneficial is a collaboration between a community garden and a school.

How and when was Camdenville Paddock Community Garden founded?

The paddock was founded in 2012. The site is part of Camdenville Public School, but for many years it had been neglected. In 2011 a group of neighbours and school parents approached the school and Marrickville Council about the possibility of remediating the space and turning it into a community garden. 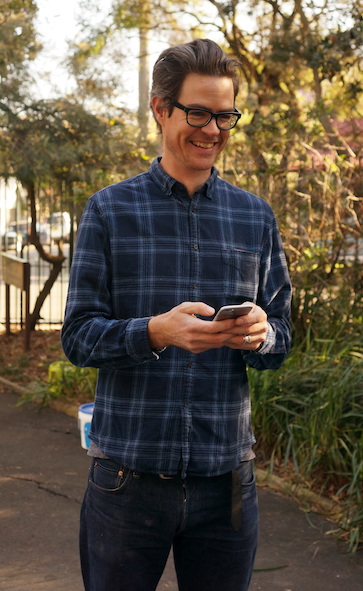 After removing a jungle of weeds, the entire site was covered in a layer of geotech fabric and then volunteers constructed 40 raised garden beds using old railway sleepers. Tonnes of soil and mulch were trucked in and we started the slow process of planting and enriching our soil. Since then we’ve added rainwater tanks, chickens, an eco house with solar power and a composting toilet, dozens of compost bins, and lots of places for children to play.

Since then we’ve added rainwater tanks, chickens, an eco house with solar power and a composting toilet, dozens of compost bins, and lots of places for children to play.

We are very lucky to have the support of Camdenville Public School, Inner West Council, our members and many volunteers and donors who have given us their time, energy and materials over the years.

How do you maintain an open and friendly garden and ensure there are some rules for the members to follow as well?

We have a code of conduct and guidelines that new members agree to when they join - all designed to encourage people to be safe, proactive, community-minded and conscious of others. It’s also very important to us to welcome new members and make sure they are introduced to others.

We have a monthly Paddock Day where we work together on communal tasks, and we invite the public to visit and experience the garden. We usually have a barbecue and talk about what’s happening in the space. We also hold an annual Open Day where everyone is welcome to the party.

Our members are partly local residents, partly school families, and we also have one ‘business’ member - the Only About Children childcare centre. So there’s quite a variety, but as far as I’m concerned, the more people using the space, the better. I want people to think of the paddock as an extension of their backyard, a place where it’s fine to play, invite friends, have birthday parties and meals, and meet others.

I want people to think of the paddock as an extension of their backyard, a place where it’s fine to play, invite friends, have birthday parties and meals, and meet others.

Can you briefly describe how Food Scrap Friday works?

Food Scrap Friday is a way for families from Camdenville Public School to recycle their food waste. They simply bring their kitchen scraps to the school gate on Friday mornings, where volunteers collect them and take them to the paddock for composting. Each week as many as 40 families are contributing, and so far we have collected and composted almost 1.5 tonnes of kitchen waste. By keeping kitchen waste out of red bins, we’re reducing the amount in landfill, enriching our garden soil, and closing the loop of food production / consumption / disposal.

How has the project started?

Food Scrap Friday has been up and running since October 2016, but community composting is something that we’ve been wanting to do at the paddock for a couple of years now. We just didn’t know how to do it efficiently until the children provided the inspiration. An initiative called Waste Free Wednesday was the spark—a once a week day when kids are encouraged to pack a ‘waste free’ lunchbox.

How do you make sure the members bring in only compostable waste?

When we started, we put notices in the school newsletter and posters on the gate where we specified what we accepted. We’ve never had a problem with contamination.

Do you have an estimate how much compost you produce? How long did the community take to collect a tonne of waste?

That’s a good question. It’s hard to say exactly how much output we get. We’ve emptied several 400 litre Aerobins and a number of smaller compost bins, but we don’t weigh the compost on the way out—we just spread it on our garden beds!

It took us 22 weeks to collect our first tonne. We started small—only a few families bringing scraps at the beginning—but as more people got involved and we started handing out fancy upcycled buckets to committed contributors, our intake has increased, and we now have a pretty regular intake of just under 100kg per week. 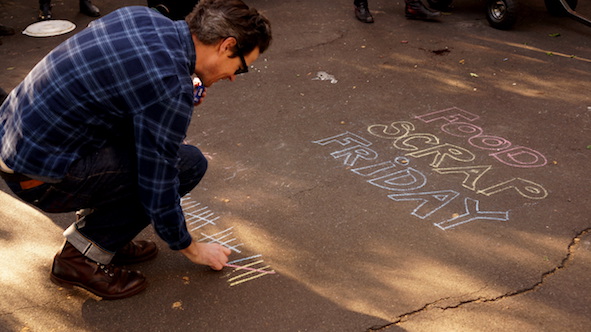 How much effort does it take to organize the event every week and how many volunteers get involved?

Usually at the school gate there are three or four adults, and a team of children—the Camdenville kids have really adopted Food Scrap Friday as their own. The children keep the tally of contributions, and the adults gather all the scraps into buckets and weigh them, wheel the buckets down to the garden in trolleys and layer up the compost bins with green/brown material. We also aerate existing bins with compost corkscrews, and make adjustments to ensure they are all composting well. The whole process on a Friday morning usually takes 1.5-2 hours.

We get extra buckets from Reverse Garbage or donated by organisations like Alfalfa House Food Co-op. For ‘brown’ material we receive donations of tree mulch and clean sawdust. We also use leaves from around the school grounds, and old straw from our chook shed.

What are the greatest benefits of the project?

The greatest benefit of the project is that by keeping kitchen waste out of red bins, we’re reducing the amount of food waste in landfill, enriching our garden soil, and closing the loop of food production / consumption / disposal.

The project has engaged children in learning about where food comes from and where waste goes.

The project has engaged children in learning about where food comes from and where waste goes. It provides a simple option for families who want to compost but can’t, and it creates another way for the school to introduce practical sustainability education into the classroom.

Inspired by Food Scrap Friday, the children at Camdenville Public have installed compost buckets in every classroom, so fruit and vegetable scraps from morning ‘crunch and sip’ are now being composted. So what started off as a simple idea has spawned many positives.

Food Scrap Friday could easily be replicated in schools and community gardens in the Inner West and beyond.

Food Scrap Friday could easily be replicated in schools and community gardens in the Inner West and beyond. It’s a simple, volunteer-based project that is creating new connections between our school and garden, and providing multiple benefits for both.

What feedback do you get from the parents and the children?

Feedback has been overwhelmingly positive. A lot of parents have told us that they wanted to compost, but were unable—mainly due to lack of space. My own experience also tells me that composting can be tricky—years ago I learned the hard way that you need a mix of green and brown material in order to do compost well. In fact, the more diversity of materials, the better. So it’s partly accessibility and convenience, and partly education. The kids love counting, weighing, examining the scraps, sniffing the waste!

How does the school and the garden benefit from this collaboration?

There are LOTS of benefits, but I’ll just mention a few. Firstly, we no longer have to purchase compost for the garden beds at the school or in the community garden—we’re taking something that would otherwise have been buried in the ground and turning it into a resource that is enriching our soil and helping us grow even more (not to mention preventing the production of methane from anaerobic decomposition in landfill).

Secondly, we’ve found a way to process a lot of the ‘brown’ material that we produce, such as autumn leaves, grass clippings, and straw from the chook shed. We now process it through compost, so it’s no longer a waste product.

Thirdly, the children have used Food Scrap Friday and the Paddock in their Project Based Learning. They have done work on soil health, planting, composting and water saving. There are possibilities for work in maths, science, biology and probably many other curriculum areas.

Fourthly, the children are learning where food comes from—that it grows in the ground, rather than arriving pre-packaged in the supermarket—and that we need to maintain our environment, water and soils in order to get the best out of them.

It’s been an amazing community-building activity. 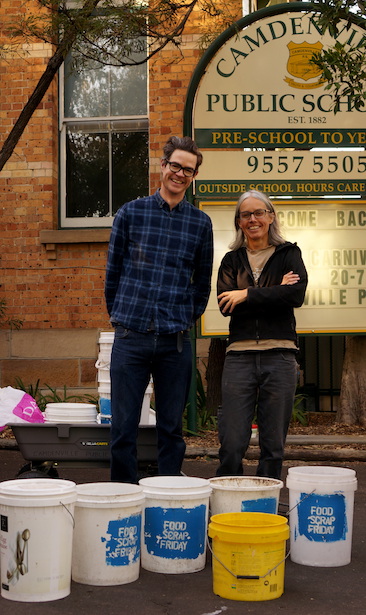 And finally, it’s been an amazing community-building activity. It has been inspiring to see people having conversations about composting at the school gate in the morning, and Food Scrap Friday has brought a wonderful new wave of enthusiastic new members to Camdenville Paddock who are now learning (and teaching each other) about the pleasures of gardening.

Does the garden host any other events?

Every month we have a Paddock Day, where members and the public are welcome to visit the garden. We use these days to do communal work like planting and weeding common areas, spreading mulch and planning future activities, and there’s usually a barbecue. Check our website (www.camdenvillepaddock.com) for the next date.

What's behind the successful collaboration between the garden and the school?

I think the success of the partnership at Camdenville probably comes down to the garden community being a mix of parents and local residents. There are many links between the P&C, school management and garden committee. Much of our success is certainly due to the involvement of parents as volunteers, and certainly there are many benefits when school communities are able to engage.

How did you deal with the question of “strangers” entering school premises. Has anyone raised a question of children's safety?

Camdenville Paddock is behind locked gates, and members are only permitted to be there until 10.30 in the morning and after 3pm in the afternoon (and anytime on weekends and holidays). Non-members are only permitted on Paddock Days or as the guest of a member (and again, only ever during the hours above), so we’ve never had a problem with “strangers” on the premises.

What’s your future plans for the garden?

Our next project is the development of two ‘biodiversity areas’ in the paddock—two habitat zones which we’ll be replanting with local Cooks River Valley native plants. We’re working with Helen Knowles from the Marrickville Community Nursery on a planting that will encourage beneficial insects, critters, frogs and birds to the garden, and discourage pest insects. With much of the paddock dedicated to food crops, we hope that these areas will bring a little more ‘nature’ back!

Thank you for sharing your experience on our blog and signing up the garden with ShareWaste.